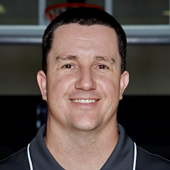 Coach Jon Clasen joined the Hope International University coaching staff in 2008 as an assistant coach to former head coach Greg Pappas. Clasen remained after Pappas’ departure following the 2008-09 season and has worked as part of coach Bill Czech’s staff since Czech came on board in 2009-10. The Royals have posted a 115-109 record during Clasen’s tenure at Hope International.

The Royals have made three consecutive appearances in Kansas City at the NAIA National Tournament and two trips to the GSAC Tournament Finals. HIU has appeared in the second round of the NAIA Tournament twice and made the Semi-Finals in 2014-15.

Clasen graduated from HIU in 2006 with his Bachelor’s in Human Development and received his Master’s in Coaching and Athletic Administration from Concordia Irvine in 2011. Clasen and his wife Elizabeth have been married since 2003.