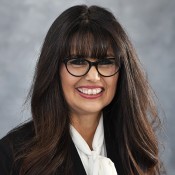 Teresa Smith was appointed Vice President for Enrollment Management in February 2010. Mrs. Smith has served HIU as Director of Admissions for the Graduate and Online programs since 2007. She was a change-agent within her department and implemented successful recruitment strategies and new initiatives. Under her leadership, the admissions team helped increase adult and graduate enrollment by 10%.

Mrs. Smith was also instrumental in coordinating the operation of several off-site education centers, partnerships and online programs. She played an integral role in creating the new infrastructure that streamlined graduate and online admissions into one department.

Prior to working at HIU, Mrs. Smith was employed in banking and finance for 16 years in various supervision and management positions, after which she served as an admissions counselor with the Institute for Professional Development.

She has an extensive background in volunteer leadership and coordination, including three years as a chaplain at the Corona Regional Medical Center, four years as the National Day of Prayer coordinator in the City of Corona, a perspective coordinator at the World Mission Center, a volunteer counselor at the Norco Rehabilitation Center for Women, and a counselor and teacher with the Salvation Army.

Mrs. Smith is a graduate of HIU, having earned both a Bachelor of Arts and a Master of Arts. She currently holds membership in the National Association of Graduate Admissions Professionals and the California Association of Marriage and Family Therapists.

Mrs. Smith enjoys spending time with her husband Rick and their family, especially her two grandchildren Gavin and Tessa.