Hope and the Hiddenness of God 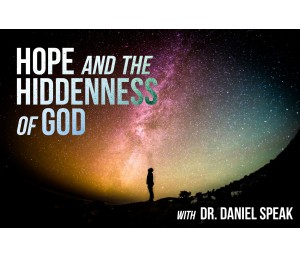 Daniel Speak (Ph.D., University of California, Riverside) is Professor of Philosophy at Loyola Marymount University in Los Angeles, California. He specializes in metaphysics (especially the metaphysics of free will) and the philosophy of religion. He also has research and teaching interests in ethics and epistemology. His books include The Problem of Evil (Polity Press, 2014), co-editor (with Kevin Timpe) of Free Will and Theism, (Oxford University Press, 2016), as well as chapters in The Oxford Handbook of Free Will (2nd Edition), The Routledge Companion to Free Will, and elsewhere.

"Almost everyone would like to have stronger evidence that God exists. But does the fact that the evidence for God's existence is weaker than we would like count as positive evidence that God does not exist? An influential argument along these lines is surprisingly strong. I will be hoping that hope can help us to deal with this problem of divine hiddenness."

This event is FREE and open to the pubic.