"Our story didn’t really begin with a light-bulb epiphany, a voice in the wind, or anything exciting like that," said Tyler Patterson. Instead, Povertees began with a simple question: what does it mean to live and act out equality and justice?

In November 2007, Patterson (BA ‘11) and his friends Trevor Smith (BA ‘10), Matt Donahue, and Gianna Persico collaborated to answer this question. The result was an organization dedicated to raising awareness for and combating the effects of poverty. Smith explained that phrases like "Jesus loves you" are easy to say, "but how people live their lives determines if their allegiance is more than mere words – it is a lifestyle. Povertees [seeks] to embody this message." The group is known for taking food, clothing, and community to the streets of downtown Los Angeles. Povertees became popular on the Hope International University (HIU) campus not only for their ministry but also for their unique t-shirts, called Povertees, which are a solid color with a decorative pocket.

"The goal was simple," Persico said, "…to care for the poor through loving friendship and the distribution of food and clothing." The simplicity of the idea soon attracted other people, like Hughie Hughes (BA ‘11), who knew after one trip to L.A. that he wanted to get involved with Povertees. The impact Povertees has had is evident in the way the members reminisce about different moments with their friends. When Hughes was leaving for a mission trip to India, his friends in L.A. made him a necklace so he would remember them. Persico recalls visiting one woman in the hospital and establishing a deep bond with her just by bringing in flowers and spending time at her bedside. Donahue happily remembers one man starting his own car washing business and being able to move off the streets.

One of Patterson’s lasting memories with Povertees happened when the group was putting together an informational video. Louis, one of Povertees’ closest downtown friends, was asked to do the voiceover. Patterson said many viewers have been struck by how powerful and evocative Louis sounds. It makes Patterson even more eager to get people involved in Povertees, so they can see for themselves how amazing the people in L.A. really are.

The video is just the first step the group is taking to expand their involvement and focus their commitment. "The work Povertees does is important because it provides for people’s needs," Persico said. "More important, it seeks to provide holistic rehabilitation in order to break the cycle of poverty. Instead of simply handing out food and clothes, Povertees seeks to attack every aspect of poverty in order to eliminate the problem for willing individuals."

During the summer Povertees spent time reimagining its mission and goals and growing the ministry. From the apparel side, Hughes says that Povertees is a "clothing revolution" and is looking to use their online store to expand its market. Donahue said he would like to see Povertees help the homeless both domestically and abroad. To that end, the group filed paperwork in November 2011 to legally establish itself as a nonprofit organization that is better equipped to meet the needs of the people it serves. "In the future, we are looking to provide connections to rehabs, housing, and counseling, and to provide employment through the production of our shirts," said Patterson.

Everything comes back to relationships for Povertees because "it's so important to encourage a community between the rich and the poor," Donahue said. "Our love can't be limited to certain groups of people." The group is reaching out continually to the community with opportunities for involvement. Hughes and Povertees hosted a Create-a-Pocket party at HIU where attendees paid for the cost of the shirt and then used the provided materials to make their own unique pockets. They could even purchase and create a shirt to donate to the homeless. Hughes said the turnout was incredible with friends, family, newcomers, and even Evan Longoria of the Tampa Bay Rays in attendance. Also at HIU, Hughes and Patterson headed up Sack Lunch Ministry where students were asked to donate one of their cafeteria meals and/or go as a group to downtown L.A. The value of the donated meals was used to pay for sandwiches, chips, fruit, cookies, and bottled water, which were packaged together and distributed on the streets.

There are an endless number of ways to support Povertees: purchase and wear a shirt, volunteer to help make shirts or to take trips to L.A., and pray for God’s continued guidance. As Povertees continues to go beyond the borders of traditional ministry to discover and fight the underlying causes of poverty, members urge people to help the organization and those in need by being examples of justice and equality in their own communities. Hughes said, "We encourage people to perpetuate change through the lives they lead." 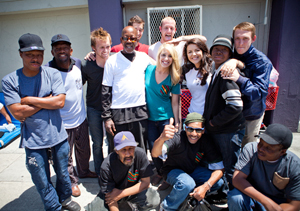