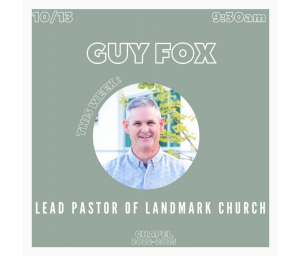 Guy Fox is a California native who loves baseball, ice cream, and hanging out with his family. A graduate of Hope International University and Trinity Theological Seminary, he has travelled all over the world on mission trips but has never been to Fenway Park to see his beloved Red Sox play a home game. He has been married to Kathy (also a Hope grad) since 1989 and they have three grown sons:  Zach, Jordan, and Trevor, two lovely daughters-in-law, and three awesome grandkids.  If he wasn’t a pastor, he would want to join the guys on American Pickers and go collect old junk.  After 15 years in youth ministry, God called Guy and his family to plant a church in Murrieta, California, where they spent 14 years. In 2017, Landmark Christian Church in Diamond Bar, which is the church where he grew up and met his wife, invited him to come and serve as Lead Pastor.